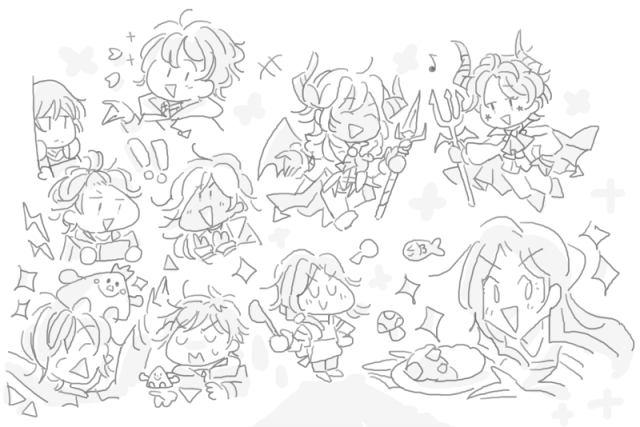 A list of what I did for the month, or at least up to now:

Obey Me!: The mobile game saga. You’re a human exchange student in a demon academy meant to foster bonds between the different worlds, and shenanigans ensue. I am still laughing at this conversation:

Everybody does what they want and I respect that. This is the one and only mobile gacha game I’ve ever gotten SSRs and URs from single pulls (because the game lets you pull for free every couple of days). The dance sprites are so cute…the backgrounds and hands are very sexy…and above all that, the writing is a lot of fun to follow! There’s so much flavour to it. It has its share of adult humour, so take note of that if you want to check it out (the TOS mentions people under 20).

A3!: I can’t believe A3 would spring another event not even a full week after Citron’s. Why. The last minute ranking rush for Omi’s event was terrifying. A3’s very easy to rank for compared to all the rhythm games I played before, though. I still wonder how I had the energy to balance ranking for IDOLiSH7, I-Chu, and Tsukino Paradise simultaneously. I miss playing the Show by Rock!! music game with the three button system.

Night of the Full Moon: I finally figured out how to use Soul Hunter. I am unbeatable the moment I can get my hands on Knell and Guider Lamp…it’s a very easy class to cheese through Hard with compared to the others. I’m only left with the Diary achievement that requires 3 boss skills…I can’t wait to complete it (and wait for more achievements to clear if another update rolls around).

Matsuro Palette: The mobile game saga. Fulfill the wishes of the girl in the painting, lest you meet a gruesome end. It’s pretty neat! I like its presentation a lot. It’s basically a puzzle game with some horror mixed in where you figure out how to proceed without dying as much as possible. It is only available in Japanese at the moment, but the application itself isn’t region locked.

Terasene: The mobile game saga. Take on your role as the sun to protect a girl as she makes her way through the night to get to her destination. I am struggling to get past one of the early levels, but I really like its take on the tower defense genre. It’s by the same creator as Matsuro Palette, and you can play it in English, though the language is a bit clunky.

Flip Flappers: I finished watching it. It’s a very pretty show to look at! The show can be somewhat stream-of-consciousness when it comes to seeing how things are connected to each other, but I think it works with the idea of Cocona being caught up in the “flow” of the story.

Kamen Rider Zero-One: I caught up with 21 episodes after seeing my friend talk about it. It sure is wild…I can’t believe how much went on in the show in the time I wasn’t watching it. I’m curious about where the story is going, but for the time being, my biggest desire is to see Aruto clown on Gai. Every scene Gai gets made fun of is a good one.

Kamen Rider Decade: I was watching Inazuma Eleven Ares with my friend and to wash out the Experience of watching it, we settled on this. EVERYTHING IS HAPPENING, THE SHOW. I’m still thinking about the scene where Tsukasa goes “if he (Yusuke) protects everyone’s smiles, then I will protect his smile! And I have to say, he’s got a pretty good one.” IT’S SO GOOD. I should probably finish Kuuga, Agito, and Hibiki before going back to the rest of it…

I wasn’t aware there was a novel until I saw my friend post about it, so I got it along with the other of Tomihiko Morimi’s books made available in English (Penguin Highway). I really like the whimsical tone of the writing and the idea of how self-fulfillment goes both ways…I need to find more books to consume.

There was supposed to be a photo here, but I got lazy, so whatever. I got another batch of acrylic stands and some scale models of Kamen Rider weapons…oh, yeah, I guess I got the drama CDs for KLAP, too. I zoned out listening to most of them, but I am laughing at how clear the tracks make it that Koyomi is the one that lays down the law. Good. One curious thing was that the CDs credited the writers, and Camil’s was the only one that didn’t involve Komamame (the production director). I wonder if different people are in charge of handling how each character is written, rather than one person?

I also managed to place an order for the goods that were released for Tasokare Hotel’s second reading play! I’m so relieved I got hold of the Neko and Osoto stands before they sold out to complete the main trio with Atori…I can’t wait for them to arrive (along with my copy of Rune Factory 4 SPECIAL).

I got into wrapping my books because I figured I might as well when I was taking them out (particularly my art books) to write about. I feel so at peace knowing they have some layer of protection…no longer will I have to worry about dust settling on them if I leave them out for too long. 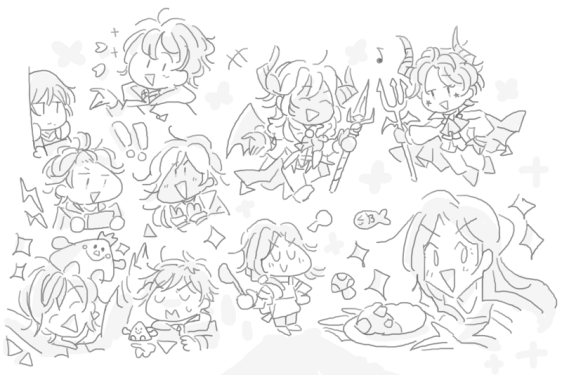 I was in a mood to draw A3!, so I did. It mostly stemmed from me wanting to draw Citron and Itaru. It didn’t feel right to not include everyone else, so I added on the other members of the Spring Troupe…Misumi makes a cameo because his mini chats with Tsuzuru make me laugh. I want a Sankaku-kun. Izumi is a given.

Raspberry Mousse Cookie and Rose Cookie from Cookie Run. I cannot stop laughing that Raspberry has a crush on Rose but has no idea what he’s feeling and thinks he’s cursed, while Rose is all oh yeah that’s the guy who watches me dance daily. Peak banter.

The demons from Obey Me. I like drawing Satan’s ribbon thing and the…scorpion thing crawling along Asmodeus’ clothes in his demon form. Drawing this made me realise that I don’t draw guys often because they usually don’t have a lot of flowy aspects to their designs. Obey Me has a lot of fun general interactions, so I want to draw more of them when I can.

I am currently zoning out with the warm weather…I feel like I could lie down and take a nice nap. I hope it’s been cooler for everyone one else out there, or it stays warm if you like it that way, heh. Other things I did this month:

Treating yourself with a small snack is a good way to lift up your mood. I want to get some cake…in the meantime, I hope everyone’s February wrapped up well! Here’s to the leap year, and may March bring good things.

All spoilers in media-related posts (games and the like) are whited out unless stated otherwise.

Cool games you should check out: